Too ill to think. Here's some links:

# Simon Upton snorts at the banal garden aesthetics of the middle class property boom. S'True. I'm not calling for a wholesale return of the Rose Gardens of UK lore, but what's wrong with a few hebes, for crap's sake? Houses are no longer places to live in but assets to sit on for capital gain, not unlike the bland cars and SUVs they drive, unadorned by bumper stickers or any personalisation that might affect that inevitable sale. It's part of a wider mentality shown by Apple and Microsoft that property is not so much owned any more, but constantly on loan from someone else.

# Jesse's Café Américain posts up why the main economic dogmas of Austrian, Marxist, Monetarist, Keynesian theorists are all wrong. I've been a fan of Mandelbrot for a while. Never underestimate the power of chaos. It sneezes in the face of ceteris parabis. HT Bernard Hickey.

# Andrew Sullivan points to a graphic example of the debilitating effects of torture. Here's former Iranian Vice-President Mohammad Ali Abtahi before arrest and after, at the regime's show trials: 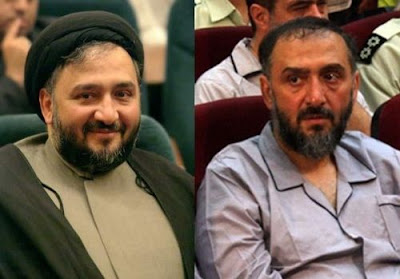 # Thanks to the Dom Post for the story on the Duke of Wellington. Didn't know he'd been sick. Retrospective sympathies. Here's him opening the Fringe Festival in 2006. He got a heap of strangers (including me) off Manners Mall to carry all this baggage to Civic Square. I love Wellington for this. It's a place where you can just trip over random cool shit
like this happening: 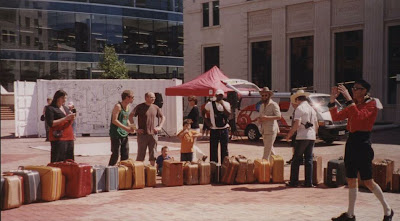 # Lewis Holden at the New Zealand Republic blog explains the Duke of Wellington slowly and in small syllables so the fossils at the Commonwealth Monarchist might get a clue on the excellent Duke. Far as I see, we get more public utility from the Duke of Wellington than any royal highnesses way over there in Blighty. You won't see Liz or Phil pulling stunts like this without a copious retinue of expensive pleb-funded flunkies.

# If it's too early to say what the impact of the French Revolution truly was, it's way too soon to gauge the full impact of The Rocky Horror (Picture) Show. The UK Times digs into the strange motivations of Richard O'Brien's headspace. It really put my Daddy Issues into perspective.

# If you want to go bankrupt, divorce an American or get sick in that twisted country. Poor bloody John Cleese in the former, getting dumped by his former wife shrink. There'll be a bit of schadenfreude at Mt Cleese in Palmy over his pain. Much more sobering is the documentary on Bill Moyers Journal this weekend. It looks at the US Health mess in a way that Sicko missed. Directed by Alex Gibney (Taxi to the Dark Side and Enron; The Smartest Guys in the Room).

For those going under the knife soon, count your blessings that you live in NZ at not at the mercy of Money Driven Medicine.

# Ever since DPF posted up his holiday snaps of Martha's Vineyard, I've been wondering about the social psyche of this Wanker's Paradise. So much for trickle down theory, sez the Telegraph. The only thing that runs downhill is shit. Similar things happen here in NZ in the off-season tourist areas such as Taupo, Rotorua and Mt Maunganui.

# And finally, New Scientist gives a guide to how to wrap one's brain by counting from 0 to 10 dimensions. My favourites are 1½D and 8D.
Posted by Will de Cleene at 17:53