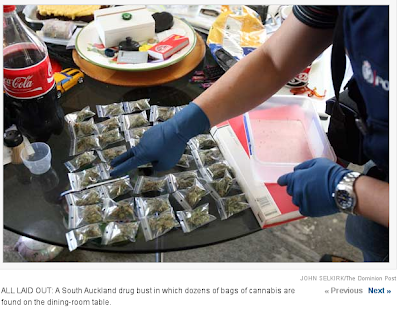 # Stuff looks at the futility of raiding tinny houses. The photo features barely over an ounce worth of weed all bagged up for retail. Would the government like tax on that? Or will they continue to pour tens of millions of dollars every year into that King Canute statute, the Misuse of Drugs Act?

Oakland residents overwhelmingly voted Tuesday to approve a first-of-its kind tax on medical marijuana sold at the city's four cannabis dispensaries. Preliminary election results showed the measure passing with 80 percent of the vote, according to the Alameda County Registrar of Voters.

# Even the suits are getting serious about reform. The Financial Times is calling for an end to the War on Drugs now. The Economist looks at how former drug warrior Bob Barr has had a Road to Marrakech experience.

# Meantime, Obama's Drug Czar Gil Kerlikowske has changed his position once again. Now he's saying he won't support legalised cannabis. Earlier in the year he was saying that the War on Drugs is pointless. Which is it, dude? This guy wriggles around more than an agave worm in a cactus.

# Here's a good example of how the War on Drugs is a civil war splitting families:

# NZ's prison population is the second highest per capita in the world behind the USA. Maybe we should export all those drug crime jailings to the Netherlands, seeing as how they are closing eight prisons. They don't need 'em. Instead, they're being used to lock up Belgium's crims.

Slate goes to a trade show with a difference. HT Andrew Sullivan: