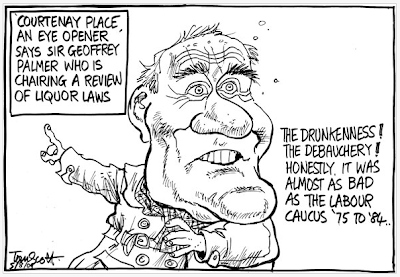 Tom Scott is onto it today. For the record, here's two examples of historical debauchery within the Houses of Parliament during that time.

Former Speaker Gerry Wall was once so tired and emotional during one parliamentary sitting, he called for a vote with "Ring the doors! Lock the bells!" Seems relevant in light of Werewolf III's interview with Speaker Lockwood Smith, which mentions the old pickle.

The second story requires some circumspection. No names, but a certain gathering of MPs spent a long night in a Parliamentary office discussing cabbages and kings. Discussion and drinks flowed, to the point where they had drunk all their own offices dry. As you can imagine this was no small feat, and it was well past 2 am when this point was reached (2 am is the Law Commission's favoured Pumpkin O'clock).

A motion was passed by the members to break into another colleague's room and raid their booze cabinet. Toasting their success, they returned to their deliberations in comfort. Just as they were settling in, one of them notices that the Parliamentary Library is on fire. Much panic ensues and the fire engines are called.

Half a dozen appliances roll up at great haste and ask the aghast members where the fire is. They point out the window at the great flames. The fireman turns to the group and explains that the fire is beyond his control. Dawn had broken and what the diminished members had witnessed was the fiery orb of the sun rising over the building.
Posted by Will de Cleene at 18:51