Why is Kirsten Schaal so pissed off?

The Daily Show with Jon Stewart
Get More: Daily Show Full Episodes,Political Humor & Satire Blog,The Daily Show on Facebook
The NZ Herald looks at the new Texas law that requires women wanting an abortion to be raped by an ultrasound device. But the accompanying picture doesn't quite do the injustice justice. Here's a closer look at the Rick Perry Rape Stick, compared to the usual ultrascanner: 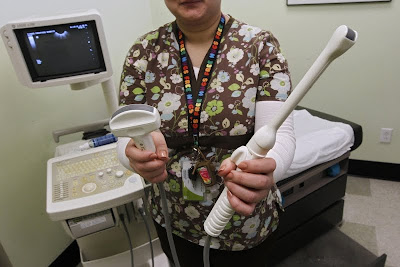 That's at least twenty centimetres of Republican plastic up a women's vagina. I can't wait for the Pat Robertson Pap Smear. That'll probably feature some rusty flanges and a gin trap.

The most vocal criticism over the Texan Fatwa hasn't been over the new law, but over a Doonesbury cartoon on the subject. Newspapers across the US continent refused to run the strip. Here's what the fuss was about, courtesy of the LA Times (click images to embiggerate):

The chances of me ever wanting to visit the USA has never been that great. But you'd sooner see Dick Cheney sucking Kim Jong Un's tiny penis on YouTube before I'll step foot in that mad land of cunty Jesus Freaks in Texas.
Posted by Will de Cleene at 18:44