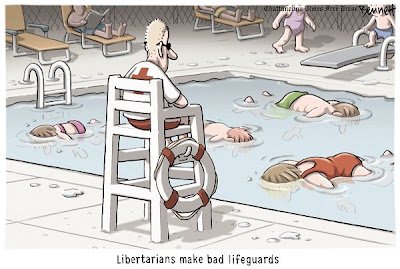 They also make bad movies. Russell Brand's execrable Arthur remake and Diary of a Wimpy Kid 2: Rodrick Rules are considered far superior movies compared with Atlas Shrugged Part I, at least according to Rupert Murdoch's critic aggregator Rotten Tomatoes. Even PJ O'Rourke is having difficulty finding something kind to say about the pool of libertarian vomit:

I hope Part Two features a zombie Ayn Rand theme. It could only improve the viewing experience.
Posted by Will de Cleene at 12:34