I don't normally go out of my way to piss off Christians, each to their own and all that. However, I was listening with increasing grumpiness to Chris Laidlaw's interview with Keith Newman this morning. He's just released a new book called Bible and Treaty: Missionaries among the Maori - a new perspective. If his talk was anything to go by, it sounds like he's convinced himself that these early converters were much better people than they were.

Now, nothing personal against Keith Newman. It's OK, he's from Feilding. Enough IT background to avoid being perceived as some kind of unquestioning evangelical as well. So, why the new glossy varnish on those old virgin missionaries?


"Keith Newman suggests that the role of missionaries has been ignored, minimised or demonised by revisionist historians."

Laidlaw calls these priests "good guys" and "impressive people," so any chance of an objective interview was not on the agenda. Which is a shame, because all this priest pampering is the most revisionist crap I've ever come across.

It didn't take easily, and it was only in the 1860s when the Maori started teaching reading the Bible to their own that Christianity really took off. It took another generation after that before the Maori commonly adopted alcohol, but that's another story.

Maori paid other prices for conversion though, for good and ill alike. The missionaries are credited with the demise of slavery and cannibalism, which is partly true. I gather that Maori were tiring of war and all the old order anyway, but I'll give them that. But the Jesus freaks also stopped a range of other Maori customs though; polygamy, games, songs. Here's Edward Jerningham Wakefield from Adventure in New Zealand. It's 1842 or '43. He's approaching the village of Pipiriki on the way to Taupo:


I was much struck with the severe discipline which this curious specimen of a warlike and influential chief, turned into a stern religious pastor, maintained over his people, who may have amounted to 200 of all sexes and ages. The houses and the pa were cleanly and well kept. Almost perfect silence prevailed during the whole day. Everything was done apparently by some rule. The ovens were made up, the firewood cut, the court-yard swept out, as though by clockwork; and none of that noisy and merry chatter was ever heard, which generally distinguishes the Maori village. Each week-day was kept with the solemnity of Sunday; and jokes, songs, dances, or romping, were entirely banished. The very children seemed prematurely grown into little old men and women. While I was greeting the chief and his family, the rest of the community sat a distance. None of the usual crowding round, and if it were not for its hilarity, almost intrusive rushing to shake hands; no shouts; not even a smile.

The Treaty of Waitangi was never a Christian document, no matter how much Rev. Bill Williams wanted it to be so. He did his best to confuse matters acting as translator, thereby creating a whole new department of legal billing that charges by the hour to this very day. Williams and Hadfield also had a curious way of convincing Maori chiefs to sign this Treaty. Here's young Wakefield again. It is 1840:


While I was waiting for the return of Kuru and the gathering of the clans, Messrs. Williams and Hadfield arrived by land. They held no communication with me; but I heard from the natives, and also by MacGregor, the skipper, who called upon them in their tent, what had been their proceedings. Turoa and Te Anaua, with several other of the chiefs who had held communication with them, told me that Mr. Williams had asked them to sign a paper (the Treaty paper), and promised them a present of a blanket from the Queen.

I quote extensively because Wakefield was actually there, and his voice is not a form of revisionism some 170 years after the fact.

For my part, I consider the early missionaries to be part megalomaniac, part messiah, a protozoic control freakery that would today look a bit like Michael Laws or Bob McCroskrie. Mad monks and whipping priests. Yes, most went native, causing problems further up the rectoral chains of command. That's the problem with missionaries, eh. There's always the risk they'll break their programming.

But that's just me. I'm biased. You'll find me in the bar, not the pulpit. Such is the power of the self-selecting bias, eh. xkcd is onto it: 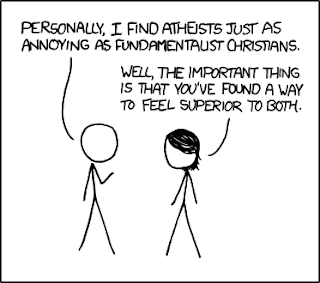