I've changed the title of the last post to better match the chapters of the Law Commission's CRD paper. No point needlessly making this series more complicated than it already is. While we're talking admin, the Law Commission has nicely laid out the report with numbered paragraphs for easy reference. For example, 4.41 refers to Chapter 4, paragraph 41. These are going to pop up here quite often, so get used to them. OK, here we go...

Recreational drugs can be a polarising social issue (1.1) On one hand, there's the argument that drugs are dehumanising (1.2), and James Q Wilson is quoted for effect:


"We treat the two drugs differently, not simply because nicotine is so widely used as to be beyond the reach of effective prohibition, but because its use does not destroy the user’s essential humanity. Tobacco shortens one’s life, cocaine debases it. Nicotine alters one’s habit, cocaine alters one’s soul."

The comparison is ludicrous for a couple of reasons. Firstly, if one were to compare apples with apples, you would compare tobacco with coca leaves, or nicotine concentrate with cocaine. Secondly, the Yanks can talk about "one's soul" til the Palins come home, but here in secular NZ you'll be pushing it uphill to debase an argument with soul transmogrification. Render unto Caesar etc.

Nothing personal against James Q Wilson. I've been scanning his book Bureaucracy: What Government Agencies Do and Why They Do It this afternoon, reading about the turf wars and pissing competitions between the DEA and the FBI over the War on Drugs. Shame he can't see the wood for the trees.

On the other extreme, there:


"are those who believe that people should be free to use whatever substances they want, with any attempt by society to limit that use an unwarranted interference with personal autonomy and freedom of choice." (1.3)

That's a bit simplistic, something you'd probably hear from an Ayn Rand libertarian, although no particular person is quoted to justify such a statement. The Law Commission then discounts James Q Wilson somewhat, noting:


"[P] sychoactive substances have been used across the world for thousands of years. At the same time, most would also recognise that all psychoactive substances may cause harm, not only to the individual but to society as a whole. Regulation of their use is therefore needed to minimise this harm. (1.4)

The footnote to this statement is as vital to enlightenment as any Terry Pratchett novel footnote:


It has even been suggested that “there has never been a society that has not had some form of psychoactive drug or drugs used by at least some of its members”.

The distinctions between legal and illegal drugs throughout history have been "somewhat arbitrary," (1.5) however we "can not turn back the clock." (1.6)


Our approach to various drugs including alcohol is inextricably linked to our history and culture.

This statement is vitally important, and the reason why will become clearer in Chapter 4. Although both harmful drugs, 1.7 explains why alcohol and tobacco have been excluded from the review:


Our review would have been unmanageably large if we had attempted to include alcohol and tobacco within it.

The Law Commission acknowledges that this may go down like a cup of cold sick in some quarters. They're not wrong:


1.8 This will not please everyone. Many of those who regard the current approach to drugs as illogical, hypocritical, and based on double standards will no doubt want us to take a bolder approach. Law reform, however, is the art of the possible.

It's an early omen that foreshadows the lack of real scope of recommendations later in the report. And it's downright strange, seeing as the Law Commission is at this very moment reviewing the liquor laws. No explanation is given as to why they don't do the obvious and have one law to rule them all.

Just how many affected people are we talking about? There's a couple of interesting charts taken from the Ministry of Health drug survey: 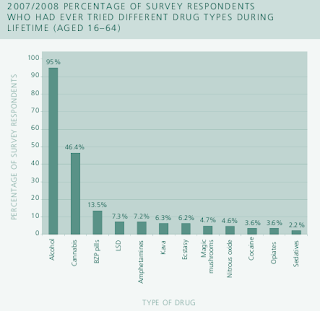 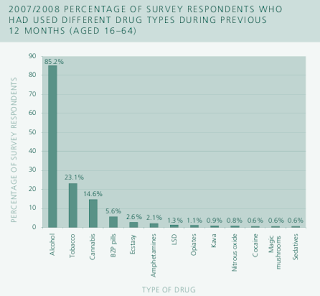 Ah, that might explain the blatant hypocrisy of drug classification. It's that tyranny of the majority thing. I bet the alcohol lobby can afford to keep their racket going forever with numbers like that. Pity the 400,000+ NZers who had used cannabis in the last 12 months though. Although arguably a bigger segment of the population than the LGBT community, they don't get boo in.

How about some global numbers? Here's the UNODC: 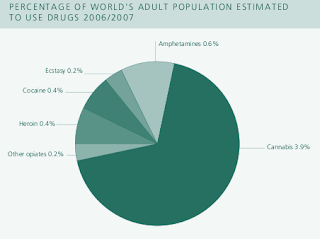 The World Bank reckons there are roughly 6.7 billion people in the world. According to these numbers, that means that there's over a quarter of a billion stoners around the globe.

The report looks at national drug trends. Amphetamine use has levelled off since the high in 2001 (1.16), while Ecstasy seems to have decreased before a slight increase, although it's difficult to tell seeing as BZP may be being marketed as Ecstasy these days (1.18).


A report prepared for the Ministry of Health estimated that in total approximately 20 million doses of party pills containing BZP or trifluoromethylphenylpiperazine (TFMPP) and related substances were sold in New Zealand between 2002 and 2006.

The Law Commission report neglects to mention that during those four years, not one fatality was caused by BZP, through use, abuse or overdose.

NZ has the second highest use of cannabis per capita in the world. Only the Canadians go harder (1.21). LSD and shroom consumption is negligible and dropping (1.24), while opiate use is even less.

The chapter concludes by noting that illegal drug consumption is "significant" and that the proportion of the population using drugs is "not really changing." (1.27)
Posted by Will de Cleene at 19:21