Thank you to Nine to Noon for pointing out BERL's latest clanger, COSTS OF HARMFUL ALCOHOL AND OTHER DRUG USE 2009. The report follows on from last year's random number generator from BERL which Russell Brown charitably described as spectacular but useless. Go on, have listen to that interview with Kathryn Ryan and tell me that ALAC CEO Gerard Vaughan doesn't sound like a freaking teetotalling Mormon killjoy.

But enough character assassination, back to the report. Although I can't be bothered going through the latest report with a Keith Ng toothcomb (detects 99.9% of statistical anomalies), there are a couple of major lies I saw in the report which signified how ignorant and useless this taxpayer funded report actually is. From page 9:

Oh good, moral neutrality. Further down the page though:

It's not because they are illegal that they are all classified as harmful. No, no, no, it's because Roche and GlaxoSmithKline haven't performed any research showing benefits from these unpatentable drugs. Unlike, for example, artificial THC spray Sativex®, which the Ministry of Health has approved for use.

And when's the last time an economist could quantify fun? How does one quantify all the violence that never happened from having a doobie instead of a dozen 330ml tinnies? Who measures how many Mallards of stress get worked off one night clubbing on E with friends? If the drugs are no good, why are they so goddamned popular?

I'm no drug snob though. I'll go into bat for alcohol against BERL's report too. The thing with statistics based on statistics is that sooner or later you tend disappear up your own standard deviation. Here's BERL's take on Australasian alcohol consumption, page 95: 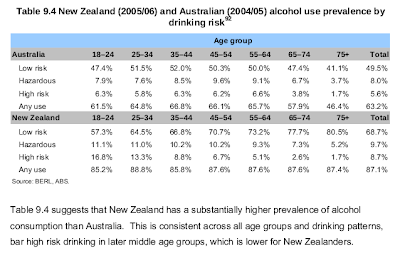 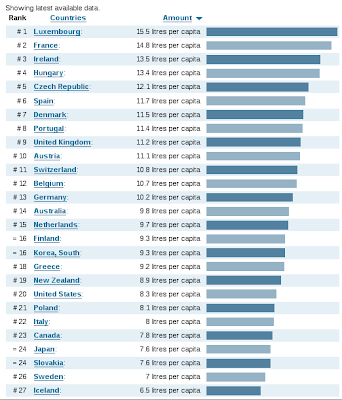 Somehow, the Australians seem to be able to put away another litre of pure alcohol a year each, yet BERL sez NZ drinks substantially more. Like buggery we do. Hell, we're behind South Korea and Greece. We should be drinking more not less!

UPDATE: note that Russia is absent from this list, presumably because all the statisticians were too drunk.
Posted by Will de Cleene at 13:09