"Yes I've voted" sez the orange man sticker on my desk. In light of the 7pm embargo on polspeak, let me entertain you with a true story coaxed out of the memory banks before the live-blogging begins. Shooting the Pook is Part Two of the Hunter Chronicles. Part One here.

This particular story is inspired by the Pook winning this year's Bird of the Year Award, and partly due to the latest iteration of George Orwell's Shooting an Elephant doing the rounds.

The old man must have set some kind of record for killing things in this country. Long before he worked the chain at the Longburn freezing works, he spent most of his spare youth in the hills shooting a wide variety of animals. Deer were his favourite target. Ducks were probably second. If deer was an epicurean kill and ducks the next skill tier down, rabbits were the equivalent of fast food.

Most days the .22 would lie in the car. Sometimes in the boot but, if he hadn't killed anything that day and there was a spare hour of light on the hills, the rifle would be within arm's reach of the driver's seat. The glovebox was always full of shotgun cartridges, the ashtrays full of live .22 rounds. I had orders to keep an eye out for rabbits as we travelled the back roads on the scenic route home.

"Wind down your window," he'd say as he put the magazine into the rifle and pulled back the bolt. The barrel would slide past my nose and out my window, aimed at the grassy knoll where a rabbit was having its last supper.

I learnt early on I could not be a doctor. I never got used to the smell of intestines. He'd bury the guts in the back yard under stones, so the dogs wouldn't dig them up. In with the dead cats with a bullet behind their ear, which he'd shot with the .22 from his bedroom window. There were strays living under the house, he insisted. Even after a Lost and Found report on the Palmy radio station matched the description and location of one such trespassing feline now pushing up stones.

My father had experimented with a kiwifruit farm out Te Puna way, west of Tauranga. It had what an environmentalist might consider a wildlife sanctuary, but what my father saw as a killing field. Ponds and gullies aplenty for the countless pheasants and California Quail who added their fates in with any ducks and rabbits. The poacher could stay home and shoot away to his heart's content. No need for stealthy racetrack rabbit hunts or Centennial Lagoon Duck massacres now.

It was no surprise that firearms were involved in my father's idea of a manhood ritual. One summer, the old man decided it was time for me to make my first kill. I had shot slug rifles at targets since I can remember, but shotguns were another step up entirely. It was time for my first .410 lesson. If I passed this exam, one day I might even get to use the .308, like my brother could.

My brother had been converted to marksmanship some years ago, and he accompanied Dad and me to the swamplands behind the caravans where we lived. No honourable ducks were at risk from this folly. The rabbits, quail and pheasant were too twitchy for a novice. Even the lowly Miner birds were considered too quick-witted for my first slaughter. I was going to shoot a pook.

Pooks were the very bottom of the skill tier. Strutting swamp hens, they only manage to get airborne from an ungainly waddling take-off. Most of the time they just stand like sitting ducks. They were generally left alone as they tasted much like the swamp crap they ate, but for the purposes of the ritual, this bird would suffice as the sacrifice.

We were downwind from the swamp as we approached its edge. It didn't take long for a pook to come into range. We lay prone on the grass and the old man signalled for me to pull the hammer of the gun back. I did so, closed my left eye and put a bead on the mired blue bird.

I lay there and nothing happened. The pook eventually meandered away and out of clear shot. I couldn't pull the trigger. At least, I knew I wouldn't. It was time to face the wrath of Dad and tell him that I couldn't shoot the pook. I wasn't expecting the punishment, which seemed to consist of never being invited to shoot anything again, which suited me just fine.


A few days after this manhood fail, when no-one was at the farm, I took the .410 and my brother's gun dog Rommel and went back to the swamp. Rommel managed to flush a pook out of the gorse bushes and I winged it as it tried to flee. It sat high up in the bushes squarking in pain. I sent the dog in to retrieve it, but he came back puffed but empty.

I shot at the pook again, but that seemed to make it worse. The branches were blocking a clear shot. I walked back to the caravan. It didn't take long until the shrieks were out of earshot.

And now, here is a photo of some black swans on Wharemauku Pond, a peaceful sanctuary favoured by ducks, pooks and swans alike: 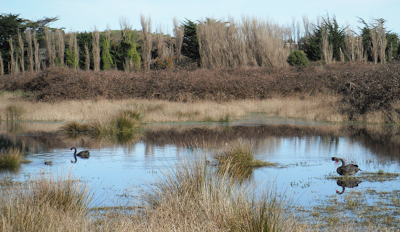