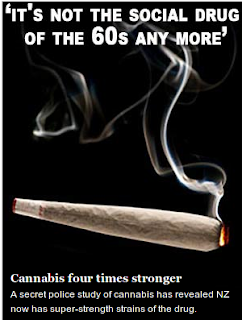 The NZ Police aren't above planting a few seedy things themselves. Witness the Big Story about the pot now being much stronger today than the '60s leads the headlines. Russell Brown rips into the dubious police spinning over at PA System, pointing to a more comprehensive European study (which, unlike the ESR, grew more than 6 plants to base their findings upon).

It's strange that Operation Lime needs such a thick coat of bullshit so soon after the raids.

More worrying for the general public should be how today's police are much more potent than a generation ago. In the 60s, the police didn't make gardening stores ID and keep records on their customers. They couldn't arrest people because of their place of employment, nor disrupt and bankrupt businesses on a whim. And the police budget on drug control has grown by at least twenty-fold since those days.

NORML News has never been classified by Bill Hastings' Office as objectionable, yet it didn't stop police from confiscating these during the recent wave of arrests. Police have never confiscated political literature quite so blatantly for a long time. A pile of NORML's Controlling and Regulating Drugs public submission forms were seized as well.

The police need a reminder that their powers are not unlimited. They cannot interfere with the political process at such a grassroots level. That's what Greg O'Connor and their millions of dollars of PR are for. Sure, feed stories to tame journos, wine and dine the politicians. But do NOT interfere with the public's right to decide its political future just because you disagree with it.
Posted by Will de Cleene at 10:21