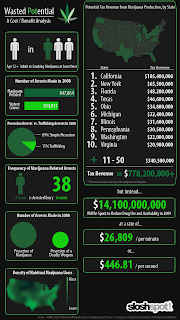 # Sloshspot calculates the estimated tax revenue from 10 US states if marijuana was legalised. It concludes that instead of blowing over $14 billion ($446 every second) on prohibition, state coffers could reap at least three quarters of a billion dollars instead. 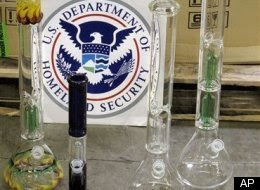 # The US Department of Homeland Security intercepted a shipment of 23,000 Waterpipes of Mass Stoning heading through the port of Los Angeles. They were listed in the cargo manifest as Christmas decorations. Bongs and other drug utensils are banned from import or export from the US.

# The Cannabis Cafe in Portland, Oregon has become the first coffee shop to open in the US. Meantime in Denver, Colorado, the first US marijuana restaurant has opened:


# Cannabis is being increased used by doctors to treat a range of disorders in children.

From the New York Times:


“It’s safer than aspirin,” Dr. Talleyrand said. He and other marijuana advocates maintain that it is also safer than methylphenidate (Ritalin), the stimulant prescription drug most often used to treat A.D.H.D. That drug has documented potential side effects including insomnia, depression, facial tics and stunted growth.


The Daily Dish points to a report of hashish used to mitigate autism in one child:

# Back at the New York Times, there's a story about a Horticulture School with a difference:


At most colleges, marijuana is very much an extracurricular matter. But at Med Grow Cannabis College, marijuana is the curriculum: the history, the horticulture and the legal how-to’s of Michigan’s new medical marijuana program.


# Marketing by confusion. Over in the UK, the government is attempting a novel attempt at blocking a Freedom of Information request from drug reform group Transform:


Now The Economist has discovered a contender for the most inventive interpretation to date. After thinking about it for nearly two years and trying out various exemptions, the Home Office has refused to release a confidential assessment of its anti-drugs strategy requested by Transform, a pressure group. The reason is that next March the National Audit Office (NAO), a public-spending watchdog, is due to publish a report of its own on local efforts to combat drugs. The Home Office says that to have two reports about drugs out at the same time might confuse the public, and for this reason it is going to keep its report under wraps.


# The Czech Republic is to allow its citizens to grow up to 5 marijuana plants for personal use next year:


As of Jan. 1 ordinary Czechs can grow up to five marijuana plants or have several marijuana cigarettes in their pockets without fear of criminal prosecution.


# And finally, back in NZ, there's a little judicial activism appearing to counteract the rabid Judith Collins' war on drugs approach:


A West Coast man whose house was awash with nearly 4kg of cannabis had simply had "a good year" rather than being a drug dealer, a judge has ruled.