The Ministry of Economic Development released a fairly comprehensive summary of the Section 92A submissions it had received. So I was a bit curious why someone wanted to pull a full OIA request on all the submissions received. The MED were kind enough to ask if there was anything I would like to withold from my submission. No worries, sez I. So much so, here it is:

Thank you for publicly consulting on the proposed copyright tribunal scheme.

In general terms, the proposed tribunal is not serving any greater public function but rather an attempt by dinosaurs to outmanoevre the mammals. The scheme is unfair as it pits very large corporation might directly against citizens' rights. It is an inefficient because the proposal is not fit for purpose. It will not work. These criticisms are expanded upon in the commentary of the Phase Questions. 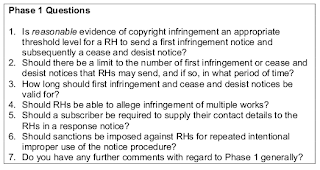 1. What does one define as reasonable evidence? An IP address, a time and a profile of an alleged infringer's OS and configuration is not enough. Apart from Intranet traffic from large businesses sharing one IP address, IP addresses are subject to misinterpretation by dynamic IPs, proxy servers, IP hijackers and tapping into unsecured wireless networks, to name a few examples. The probability of false positives and wrongful accusations is very high.

If a tribunal were to enforce some form of copyright scheme, it should be aimed at the very worst cases, the ones who infringe copyright for pecuniary gain; the spammers of copyright if you will. That's the type of deal that allows NZ Customs to enforce a range of copyrighted goods, instead of something more relevant to the public good such as maintaining the integrity of our imported food supply. For example, Customs maintains a licensing guide to Disney's Winnie the Pooh franchise, which pulls in around $1 billion a year in revenues worldwide for the corporation. It's not as if they can't afford their own brand enforcement.

Consequentially, accusations of copyright breach should be treated along the lines of the recent court case involving the reselling of Sione's Wedding DVDs. The intent should be to prevent the passing off of a tangible product for financial gain. The threshold for such copyright claims would need to match the burden of proof for such a prosecution.

2. 3. 4. The proposed tribunal structure seems aimed at the very targets that the RIAA and others have taken court in the US, solo mothers and high schools students. Certainly, the queries on the length and number of notices are trifling points of contention and merely portend to the level of spamming of notices rights holder groups are preparing for.

5. At no times should ISPs be required to divulge personal customer to details to third parties outside law enforcement, without the customer's explicit consent. ie. police.

6. Without sanctions for vexatious accusations, there is no opportunity cost real or imagined. MED and ISPs will be required to expend considerable resources on enforcing this proposal, whilst rights holders harvest alleged complaints through bots. For example, the requirement for ISPs to actively track infringement notice subscribers' internet traffic for some time will be onerous and contrary to their usual business. Rights holders should be charged full cost of proceedings to affected parties.

1. Once again, at no times does a rights holder have the right to seek subscriber contact details without their consent. While the ISP may release these details to the tribunal, it is none of the rights holder's business to know. It is irrelevant to their complaint. 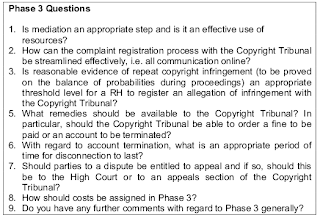 1. No. Mediation won't work. Like DRM and regional zoning for DVDs, it is one more failing idea on maintaining an extinct business model. This change might be mitigated if copyright holders had been more adaptable to modern communication. For example, it was years after iTunes launched before NZ finally, almost grudgingly, got a foot in the virtual shop. Even now, record companies make it extraordinarily difficult for NZ music fans to be good and buy legally. Here's media commentator Russell Brown talking about eMusic, the darling of the rights holder lobby:


So all this wouldn't be so bad if the service was working properly. But it isn't. It's not just the Sony catalogue we southern plebs can't get, it's more and more stuff.
And that's not entirely eMusic's fault. It can't sell catalogue where it doesn't have the right to do so. Further, I realise that some of the people with exclusive local distribution rights are indie folk who I personally know.
But I'm still paying for something I don't get, because Sony can't get it together to localise its eMusic sales. I don't doubt that this is possible -- of course it is. It only happens because it's inconvenient to interrupt business as usual.


Rights holders are largely responsible for the situation.

5. No part of this proposal causes me greater concern than the potential penalty of terminating a user's internet connection. It is draconian, disproportionate, and manifestly against natural justice. Internet disconnection is a penalty that we don't impose on criminals, let alone people suspected of copyright infringement. It is disproportionate as an internet connection is vital for businesses to operate and citizens to participate in civil society. The threat of termination of account for copyright breach must not occur. If it does pass and is enforced by the tribunal, there will be test cases in court that will get it thrown out one way or another.

Of secondary importance is the structure of fines. Penalties should reasonably reflect the value of breach of copyright. This could be a low multiple of the retail value of the most closely substitutable retail good, and not the fantastical damages which are popular in the US. A solo mother recently recently fined almost US$2 million is a case in point.

6. N/A. No disconnect is permissible.

7. Appeals should be allowed, as long as accused subscribers are provided with state-paid representation.

8. All costs should be reasonable.

While an improvement on the previous 92A, the current proposal is fatally flawed by including the disconnection notice threat. Rights holders have provided little evidence of compromise during negotiation. Indeed, the proposed copyright tribunal is one of the most one-sided haggles since the NZ government bought KiwiRail. If the tribunal must exist, it should seek and fine only those breaching copyright for pecuniary gain.