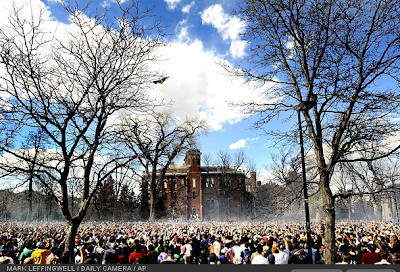 Time has a photo gallery of 420 Day turnouts from around the USA last month.

Time also looks at how drug decriminalisation in Portugal is working out. TVHE reviews another article on the Portuguese experiment.

Even Karl-i-for-nyah Governator Arnold Schwarzenegger wants to legalise it, if nothing else to help dig his state out of deficit with grass tax.

The Germans are even growing it in shopping mall basements.

And finally, Andrew Sullivan canvasses the Buds and the Bees conversations that go on between parents and their kids about smoking pot.
Posted by Will de Cleene at 19:22