I've only ever submitted one upload to YouTube, this little evisceration of Michael Cullen:

To date, it has been viewed a whole 142 times. Although it was a complete Popularity Fail, it didn't stop whatever company that owns the rights to this obscure Queen song from sending me an advisory warning. I didn't save a copy, bugger it, but the substance of the nastygram went something like this:

We have found that an uploaded video on YouTube under this user name includes media content that belongs to us. You have used it without our permission. We don't ask you to remove this content, but we reserve the right to do so whenever we feel like it. We reserve the right to include advertising on this media, if we so choose.

I have no idea if this We Are Watching You notice was sent by a bot or a human. Either way, there was no disputing which side had the better legal team. And that was just the soundtrack. Must admit, I do feel a bit guilty to all the file footage I nicked without attribution. All those images of someone else's work and no hotshot lawyer's got their back.

It's not as if I made the clip for the money. I did it because I wanted to see what it looked like, whether it was greater than the sum of its parts. And yes it was. No other song perfectly matched the angle of the sentiment, the flamboyant rage at the former finance minister's antics, and this was before the KiwiRail purchase. The images came from that great modern library of Alexandria, the interweb, even if I had to use a backdoor or two to get the right image.

But such a brush with legal goliaths has put me off putting more stuff up. I'll stick to misappropriating phrases and smudging photos. That's about my danger level. As Russell Brown mentions, these things can get nasty:

Some time back, Daniel Gardiner, who operates a YouTube channel under the name dannews, posted an amusing mash-up of an Air New Zealand ad, which I embedded on Public Address. I received a C&D letter from Air New Zealand's chief counsel, about which I did nothing -- because I knew that YouTube would act with dispatch, and without asking questions, to take down the clip under the DMCA. This is precisely what happened. But since then, Dan has twice had his entire YouTube account frozen on the basis of complaints whose nature and source he has been unable to determine.

Whether the Air NZ legal counsel has grown a sense of humour since the affair is unknown. At least Air NZ's latest ad is almost impossible to mash into anything funnier, so at least the marketing department have noticed something. But Air NZ and other companies can't run comedy advertising and suppress mockery forever. There's a very fine line between mockery and brand infringement. The Scientologists have made good use of this vagarity to close down user-generated content pisstakes and dissent on their idiosyncratic beliefs.

Please don't shoot the magpies for borrowing a few shiny baubles or taking the piss. And please don't cut off my internet because of some minor intellectual copyright infringement. You cut off my internet, you cut off my hands, my means of communication. Even in sharia law backwaters, there's a court before they cut off your hands. And Internet Service Providers are not cut out to be some Hollywood mullah's version of the Community for the Promotion of Virtue and Elimination of Vice.

This blog goes black at midnight. I hope that Monday's cabinet meeting passes an Order in Council to suspend Section 92A until greater clarification of the rules of engagement are agreed upon. 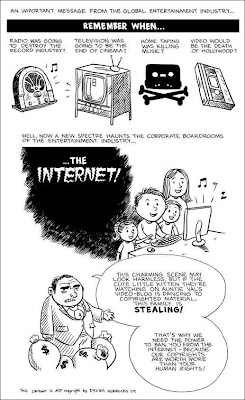