Labour's week of self-harm has led to some excellent commentary. Even the usually dire The Standard has had some good writing from Jenny Michie and Mike Smith. Rob Salmond over at Pundit surveys some factoids, but it is Jordan Carter who hits closest to the mark:


Sometimes I think Josie's notion that there are lessons for us from British Labour's experience is a misreading of New Zealand, but I welcome her reminder that modernisation involves looking forward not back (to quote a Blair slogan).

I came across the same myopia on John Pagani's blog. The post on Philip Gould has been privatised, but Google has an artifact from my comment on Pagani's eulogy: 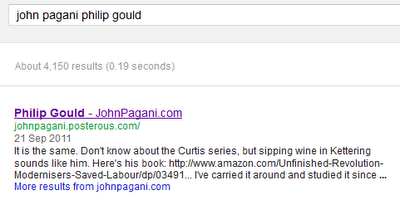 My comment enquired whether Pagani was familiar with Adam Curtis' series of documentaries, in particular the last episode of Century of Self, featuring a look at the cynical manipulation of the body politic by pollsters and PR manipulators such as Philip Gould. The reply from Pagani above shows his ignorance, as well as his unabashed adoration of Gould's tactics.

NZ is not England, regardless of what the expat Brits escaping Thatcher's England to emigrate to NZ in the 1980's think. If NZ Labour is to move into the 21st century, it must decouple from the UK Labour party and stop copying and pasting its strategy from Old Blighty. All politics is local, and lying back to think of England will not inspire local activists.
Posted by Will de Cleene at 10:57