There's a saying in Wellington; if you don't like the weather, wait half an hour. Earlier in the day, when the sun was still shining and before the overcast skies came over, I was enjoying getting lost in Tane's labyrinth: 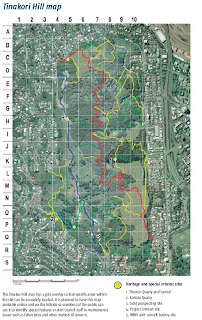 In between dodging joggers and watching the ferries to-ing and fro-ing, I noticed a dazzling sight where the caketin concourse usually stands. Of course, it was the bikers protesting the enormous jumps in registration costs under Nick Smith's ACC plan.

Instead of rattling their dags outside of parliament and being accused of being a bunch of faggots, the protest organisers wisely had all the motorcycles park up at the stadium and have the protesters march down to parliament on foot from there. Good move. The NZ Herald has some images.

While most marches occur through the old Civic Square - Lambton Quay route, this new concourse idea has great potential. One day in the future, the stadium could act as a public forum with the option of marching on parliament. That'll put the willies up the lawmakers.
Posted by Will de Cleene at 20:22