While we have to wait for January 20 2009 to kick start the litany of constitutional abuses that occurred under the Bush regime in the US, the lies, deception and deceit of Helen Clark's Labour administration are starting to become apparent.

The $1 billion underfunding of ACC's budget, which officials have known about since May, somehow managed to avoid a mention in the pre-election fiscal update. John Key is launching a Ministerial Inquiry into how $1 billion managed to fall off the balance sheet. "But my top priority is to offer an assurance to those who rely on ACC that their services will be maintained, despite warnings that the Non-Earners Account will run out of money by March."

Meantime, the Chief Ombudsmen's annual report shames but does not name some sectors of the public service who have taken great liberties with Official Information Act requests:

Beverley Wakem says the Office has observed an increasing tendency by a few government departments and Ministerial offices to ignore the provisions of the Official Information Act over the timing of responses to requesters. 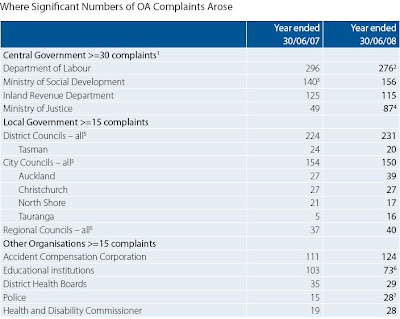 Poor old govt prawn says he had to write an answer for a fairly innocuous OIA request. He gave a good full answer but the Ministerial co-ordinator for the Ministry changed it and edited it back. He told government prawn that there was no need to provide full answers.

This is why Labour lost the election. They had completely lost sight of who the hell they were working for. For Labour's sake, there had better be no more unexploded grenades left lying about. Otherwise next year's Question Time is going to be a minefield for them.

And it was good to see Beverley Wakem on the telly having a go at the state of the mental health services in prison. Coming so soon after the damning literacy and numeracy prisoner statistics (Hat Tip Big News), hopefully someone in the MSM can find a story in this mess.
Posted by Will de Cleene at 18:30